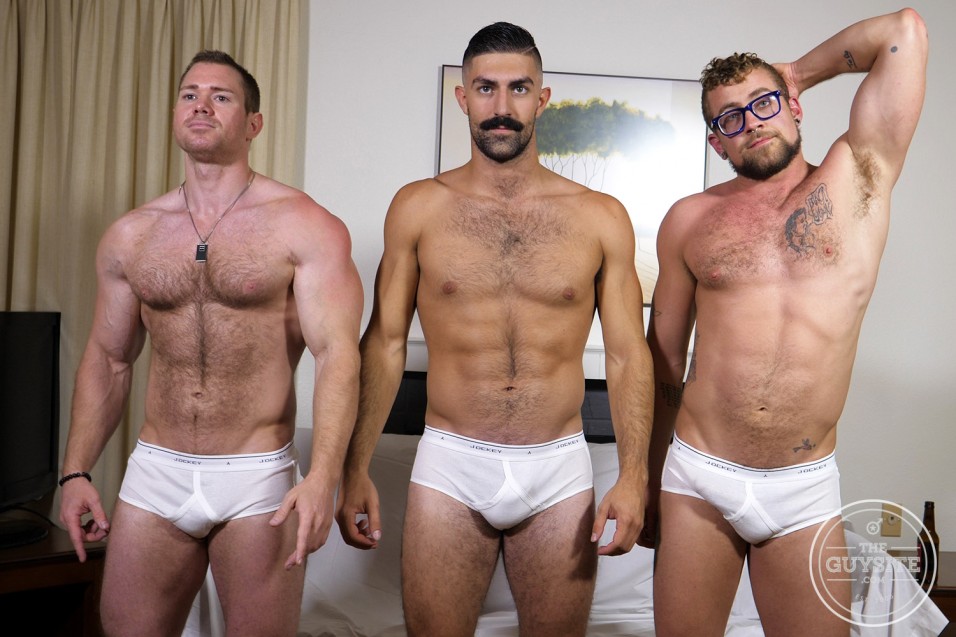 White Briefs on THE GUY SITE

The Hot Guys are above (from left to right)

Now in Hanes Briefs (above)

Beau (left) showing his muscles (above) in his Jockeys

Looks like Beau has an idea while all are wearing Hanes

Jock Straps (above) made an appearance in this video

More of these Hot Guys looking good in Jockeys

Hot Guys in White Briefs on THE GUY SITE

You’ve got to hand it to the production team at The Guy Site for this week’s two part video of three hot sexy men having fun before the camera.  Most of you know I have a severe White Briefs fetish, and to that this week’s new video on TGS did not disappoint.

About midway through Part 1, the producer distributed a collection of white briefs, and some jock straps for the hunky stars of this video to put on and model, and this was perhaps the most exciting part of this two-part video.  The guys put on and modeled brand new white briefs.

They opened the plastic packages containing Jockey, Hanes and Fruit of the Loom briefs.  (The FOTLs are not pictured here) Needless to say, all three guys looked super-hot in their clean new briefs.  In addition, each of the guys also modeled a jock strap for everyone watching these videos to enjoy!

Part 2 contained a bit more erotica, and all the guys jerked off in this segment, and all 3 men finished the video in the shower, as they all crammed into the shower and cleaned off.   I hope to see more videos on TGS that include white briefs, and hope you do too!

and lots more on THE GUY SITE?

CLICK HERE for details and lots of Hot, Sexy Men!

Spanking on Reluctant Young Men Watch them Scream and Whimper!

Humiliation on Hard Up Straight Guys Enjoy Watching their Embarrassment!

Hot Guys on Straight Men in Trouble See them Squirm and Humiliated!

Watch Sexy Franco Get Humiliated on HARD UP STRAIGHT GUYS

PURE FOR MEN – Check it out!

This blog contains explicit sexual material which may be offensive to some viewers. You must be 18 years of age and have the legal right to possess adult material in your community. The material appearing in this blog was all found on the internet and assumed to be in the public domain. I claim no credit for the pictures or videos posted on this blog. If you own the copyright on a particular photo or video, then email me at ergmvblog@gmail.com and I will remove it immediately. Please note that all images and videos on this site reflect persons who are at least 18 years or older. Mr. ER

Enjoy life and lots of fun as a Nudist

Hot Men get Groped and Jerked Off

Punishment on Straight Men in Trouble Enjoy seeing their Embarrassment!

Pay a visit to GROPING HANDS

Watch Gay Sex on OUT IN PUBLIC

Hot Guys humiliated on HAZE HIM

Click Below to see NEW VIDEOS on SENSUAL MASSAGE MOVIES

Are you clean enough for your man?

Hot Young Men getting Jerked Off!

Watch this Guy Get Fucked!

Hot Male Sex on OUT IN PUBLIC

It’s time for YOUR Physical Exam!